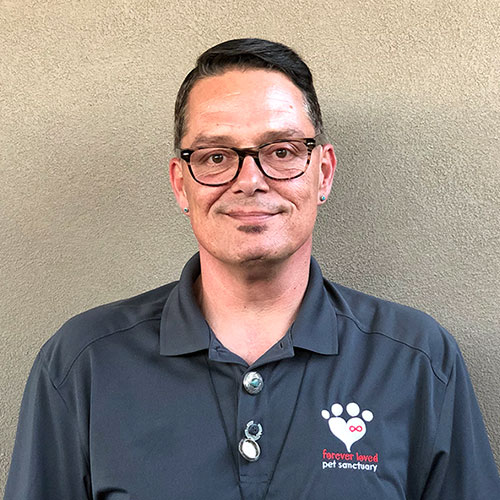 Craig and his partner, Steve, moved to Arizona in 2009. Each was born and raised in Wisconsin and lived in the San Francisco Bay area for a number of years.

Craig has had dogs his entire life. He and Steve adopted their two current pups, bulldogs Niki and Charley, from southern California. Thanks to a network of friends, Craig and Steve were able to help these dogs, whose owner was in failing health and needed to find a home for his two girls, together.

Craig went to college at the University of Wisconsin and MATC in Milwaukee, where he obtained his Associates degree in Mortuary Science and Funeral Management.  He became a state licensed funeral director and worked in various funeral homes for about 14 years. He then spent 21+ years of corporate life, before retiring early from Charles Schwab & Co.

He then wanted to do something that was more personally fulfilling in retirement, so he spoke with a former co-worker who volunteered with FLPS and convinced him to do likewise in early 2016. Craig now oversees the sanctuary’s animal status and welfare.

Craig gives his personal attention and love to every animal that comes to FLPS, helping them to adjust to their new life — he knows their current situation is due to no faults of their own. Whether he’s cuddling them in their kennel suite, walking them, or playing with them, Craig learns each of their personalities and helps assess what will make for the best new life and best loving home for each Forever Loved dog.